Childrens Author visits Hospital for Clown in the Sky

Clowns in the Sky was delighted to get Children’s Author ‘Tom Palmer’ to accompany them on a visit to deliver one of their portable arts, crafts and sensory trolleys to the children’s ward.

Tom who is married with one daughter, and lives in Calderdale has strong links to the hospital, it’s where his 15 year old daughter was born, and his wife volunteered there for some time too.

Tom has written numerous children’s books see: www.tompalmer.co.uk he has recently introduced girls into the Roy of the Rovers books with a female character named Rocky, as well as writing numerous other football stories and several that are set in war time. In 2018 the ‘Palmer’ family got a dog, and named him ‘Finn’, Tom has since written him into a book titled ‘D-Day Dog’.

Tom met with the Play Team, Nurses and a couple of children, and left them some of his books. He has also promised to visit again for a Storytime. 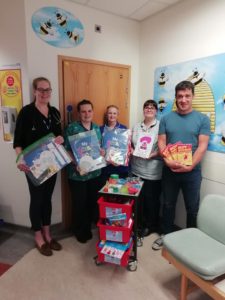