Thank you to all who have sponsored and encouraged me whilst training for the Liverpool Triathlon. I am pleased to say I finished the course in 2hrs and 36 minutes, a much better time than I was initially predicting. The £250 raised will go a long way to supporting children who are having major operations and treatments to remove brain tumours – so from all the Clowns in the Sky team, thank you very much. I will be collecting sponsorship over the coming weeks if that is OK. Below is a race summary for those interested in the finer details.

Swim
This was 1.5km in Liverpool Docks, equivalent to 60 lengths of a 25m pool. Having not swum in open water before this was all new to me and the mass start included 277 people which means one hell of a fight to get round the first buoy. The water was green and visibility was poor so I just hung close to the chap next to me, breathing deeply every 2 strokes initially to avoid the short breathes that the cold water almost forces you to take. We reached the first buoy which meant a bit of contact and argy bargy with those around you and then a long straight which allowed the pack to thin out a little. I felt more comfortable once there were less bodies around and I concentrated on trying to break into a rhythm of breathing every 3. My nightmare of having water ingress into my goggles did not come true thank goodness. We turned for home and leaving the water my legs felt like dead weights! I looked at my watch and it said 25 minutes, my previous best in the pool was 29:49, so the wetsuit, cooler water and dislike for open water clearly helped me on a treat!

Bike
I waddled into transition having mentally prepared for getting the wetsuit off quickly and my bike kit on in a set order. This went to plan and I left transition onto a nice flat section of road. The bike ride is 40km, or 4 times round a 10km route. The opening section was quick and I got comfortable in the tuck position knowing I would be here for quite a while! The route went up a bit of incline and then levelled out nicely again, the road surface was patchy in places but generally you could pick a smooth line. 5k in and the first 180 degree turn came, suddenly I turned into the wind and although it was flat, my speed plummeted from 37km/h to 25km/h. This continued for some time until another quick downhill section took me back past the transition area and to the other 180 degree turning point. I concentrated on pushing on the fast sections and then tagging onto a group where possible for the slow windy sections to push me on. The bike was quite enjoyable and the crowds were pretty big which always makes you want to push harder. Average speed was 31.1km/h which I had built up over the 4 laps, so I knew this would be around 1hr 18mins for the bike section which was bang on what I was estimating.

Run
A 10k run to finish! I left transition from the bike in 1hr 47mins cumulative time. Whilst running out of transition I tried to do the maths. If I could run a 50 minute 10k I would finish in sub 2hrs 40 – game on! However, my legs refused to do more than a shuffle and although not out of breath, my legs were failing massively. The first few kilometres I took steady so as not to cramp up. Sarah and her sister Fiona were out with their ‘Go Matt’ banner which gave me another kick on but I was tiring fast. Half way round the first lap I got stomach pain and realised I had a full tank from drinking half of Liverpool docks, this was sorted with a quick pit stop. After this I moved a bit more freely and got round to the 5k mark in 25 mins 30 seconds, particularly as Sarah brandished the bacon sandwich that would await me at the finish line. Around 6-7km I got a second wind and made some solid progress but then from 8-10km I slowed a lot. Still, the end was near and a final push saw me cross the line in around 2hrs 36 mins meaning I must have just about broken 50 minutes for the run.

Definitely got the triathlon bug and I will be entering the Leeds Triathlon in September hopefully.

Thanks all again for your sponsorship, it really did spur me on. 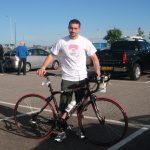 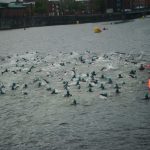 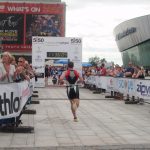 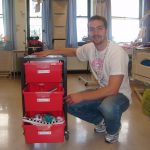