Clowns in the Sky was one of three charities chosen for Community Matters at Waitrose, Upminster, so a BIG thanks to Waitrose. Community Matters is a share of £1000 which is divided over 3 worthy causes, according to the percentage of tokens gained by each charity, it seems what we do and our display struck a chord and reached people when shopping in the St Mary’s Lane store as we benefited by  £609 when we collected the cheque on 2nd March 2017. HUGE thanks to anyone who placed a green token in Clowns pot giving us the largest share of the £1000 that was on offer. And well done to the other 2 charities too. 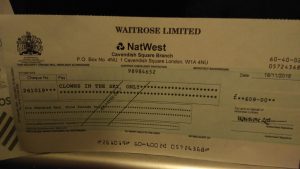